“God works beyond being, in the unconditioned, where He can move. He works in nonbeing. Before ever there was being, God was working. He created being where there was no being. Those masters who lack subtlety say that God is pure being. He is as high above being as the highest angel is above the gnat. If I were to call God a being it would be as wrong as to say that the sun is white or black. God is neither this nor that.”
(Sermon LXXXIV (9))

“There is a power* in the soul which alone is free….It is free of all names and void of all forms, altogether free and exempt, as God is free and exempt in Himself.”   *i.e. Intellect
(Sermon VIII (2))

“When all images are detached from the soul and she sees nothing but the one alone, then the naked essence of the soul finds the naked, formless essence of the divine unity, the superessential being, passive, reposing in itself.”
(Sermon XCIX (83))

“If a man should withdraw into himself with all his powers, outer and inner, then he will find himself in a condition in which there is neither image nor motive in him, in which he is without any activity, within or without. He should then observe whether activity comes to him of itself. But if he is not drawn to any work and does not want to undertake anything, then he should force himself to engage in some activity, whether inner or outer….”

“Not that one should flee from, neglect or reject one’s inner life, but one must learn to work in it and with it and from it in such a way as to let the inner break out into activity and the activity lead back to the inner, and so train himself to act in freedom.”
(Talks of Instruction)

“The eternal Word is spoken inwardly in the heart of the soul, in her inmost and purest recesses, in the summit of her rational nature, and there the birth takes place….The soul in which God is to be born must drop away from time and time from her. She must soar aloft and stand gazing into God’s richness.”
(Sermon XXIX (38)) 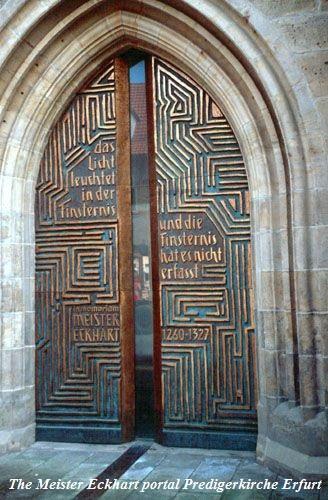 “This is the Now of eternity, when the soul knows all things in God, as new and fresh and present and lovely as I have them present.”
(Sermon XXIX (38))

“No mystic has ever dropped his plummet deeper into the mysteries of the Godhead, nor has there ever been a bolder interpreter of those mysteries in the language of the common people.”

“…one the greatest mystics of all time. He was undoubtedly a religious genius.”

(Rufus Jones, The Flowering of Mysticism)

“His daring—indeed sometimes dangerous—speculations and profound insights…greatly enriched and spiritualized the general “sense of God”.

(Evelyn Underhill, The Mystics of the Church)

“Pure and unworldly, with a remarkable instinct for metaphysical realities, and an intellectual passion for clearness even in the most ineffable reaches of spiritual experience, he pushed to an extreme that Neoplatonic conception of Reality which had always formed a part, but never the whole, of the mystical tradition of the Church.”

(Evelyn Underhill, The Mystics of the Church)

“Himself an abyss of wonder, bristling with paradox and contradiction, which yet resolve and are fused together in the unity of one great fundamental intuition, that burns and stirs in the soul of Eckhart like the word of Jehovah in the bowels of Jeremiah.

“His mysticism is quiveringly alive and of powerful vitality.”

“The greatest of all speculative mystics…his transparent intellectual honesty and his great powers of thought, combined with deep devoutness and childlike purity of soul, make him one of the most interesting figures in the history of Christian philosophy.”

“Eckhart’s experiences are deeply, basically, abundantly rooted in God as Being which is at once being and non-being: he sees in the ‘meanest’ thing among God’s creatures all the glories of his is-ness (isticheit).